The legal industry has struggled for years with a diversity problem, but how to solve the problem is an ongoing debate.

Diversity, equity, and inclusion efforts are becoming ever more significant in the legal profession, as Bloomberg Law’s second annual DEI Framework demonstrated earlier this year. But more needs to be done. While measuring and improving firm-wide diversity is an integral part of moving the needle in the industry overall, it doesn’t reflect the experiences of individual attorneys, which is why we added a few DEI-focused questions to some of our more general industry surveys throughout the year. Looking at that data gives a glimpse into the experiences of the individual, and a clue as to the importance of belonging in the DEI equation.

The legal industry landscape of the future needs to factor in belonging to truly meet its diversity goals.

How often at work do you see people who look like you? How often are they on your team? We asked over 500 practicing attorneys these questions in our State of Practice: The Great Resignation survey in order to gauge feelings of belonging in the workplace.

Survey respondents were overwhelmingly White (86%—mirroring the industry average for partners that we found in the DEI Framework), which doesn’t allow for a deeper dive into any differences in response by race/ethnicity of the respondents. But if we look at the data more directionally, we can note that only 4% of White attorneys said they “Never” see someone who looks like them on their legal team, compared to at least 12% or more for every other racial group.

The survey had a near 50/50 respondent gender split, however, which allows for a deeper analysis.

When asked how often they see attorneys who look like them on the legal teams that they’ve been a part of, just over half of the respondents who identify as female selected “All the time” or “Most of the time”. In contrast, three-quarters of the respondents who identify as male selected the same options. Women aren’t seeing themselves represented in legal teams nearly as often as men are.

How does lesser representation manifest itself in the workplace? It can result in a diminished sense of belonging.

In our Legal Ops & Tech survey earlier this year, we asked nearly 200 attorneys how much they agreed or disagreed with a series of statements, including how welcome they feel and how much they feel like they belong in their organization. While a high percentage of the lawyer respondents generally tended to agree with these statements, there was a notable difference in the responses between the men and the women. Nearly all the men said that they felt welcome in their organization, and 93% said that they felt like they belonged. Eighty-eight percent of the women agreed with both statements. Again, this survey was composed largely of White attorneys, so analysis by race/ethnicity wasn’t possible. 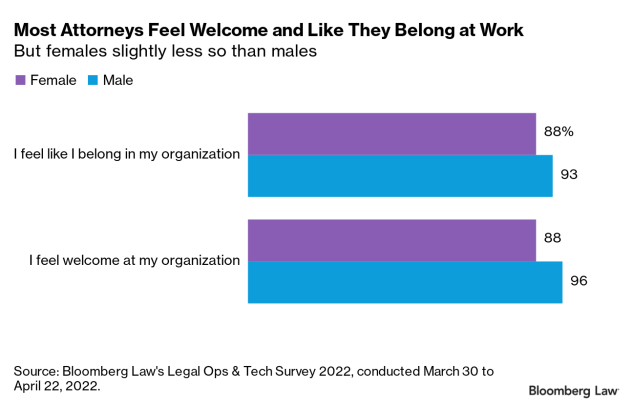 The generally high agreement with both of these statements is a good sign for the industry, but the goal is for everyone to feel welcome and like they belong. And the fact that women agree with these statements less often than men indicates they might not feel as much belonging. Why? Maybe because they don’t see themselves represented as frequently.

The Future Is Belonging

Diversity can be broadly defined as variation within a group, including different backgrounds and life experiences; equity is ensuring that all group members have what they need to succeed; and inclusion is actually inviting everyone to the table.

But what if someone still feels like an outsider? Or worse—like a token or model minority? That’s where belonging comes in. A Harvard Business Review article noted that high belonging was linked to a 50% drop in turnover risk, among other key business indicators.

In order to retain top talent, I expect we’ll see the legal industry focusing on belonging in the coming years—along with the other DEI initiatives.

If you’re reading this on the Bloomberg Terminal, please run BLAW OUT <GO> in order to access the hyperlinked content, or click here to view the web version of this article.

Why Yale, Harvard, and four other top law schools withdrew from the U.S. News rankings this week.

International Rule of Law: A Declaration of Displeasure with the International Legal System – JURIST – Commentary